Tasty Beer and Amazing Food Under the Wind Turbine 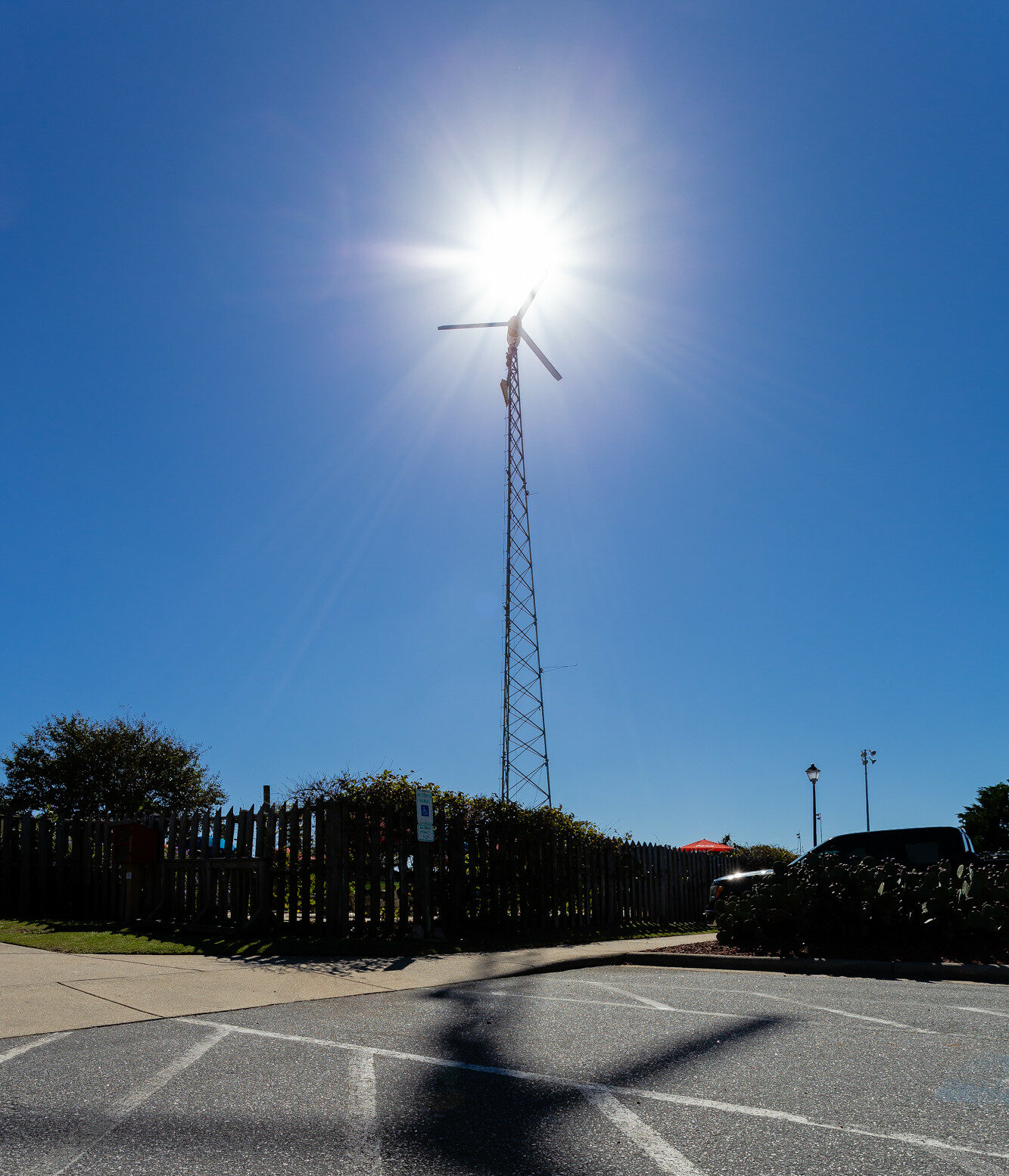 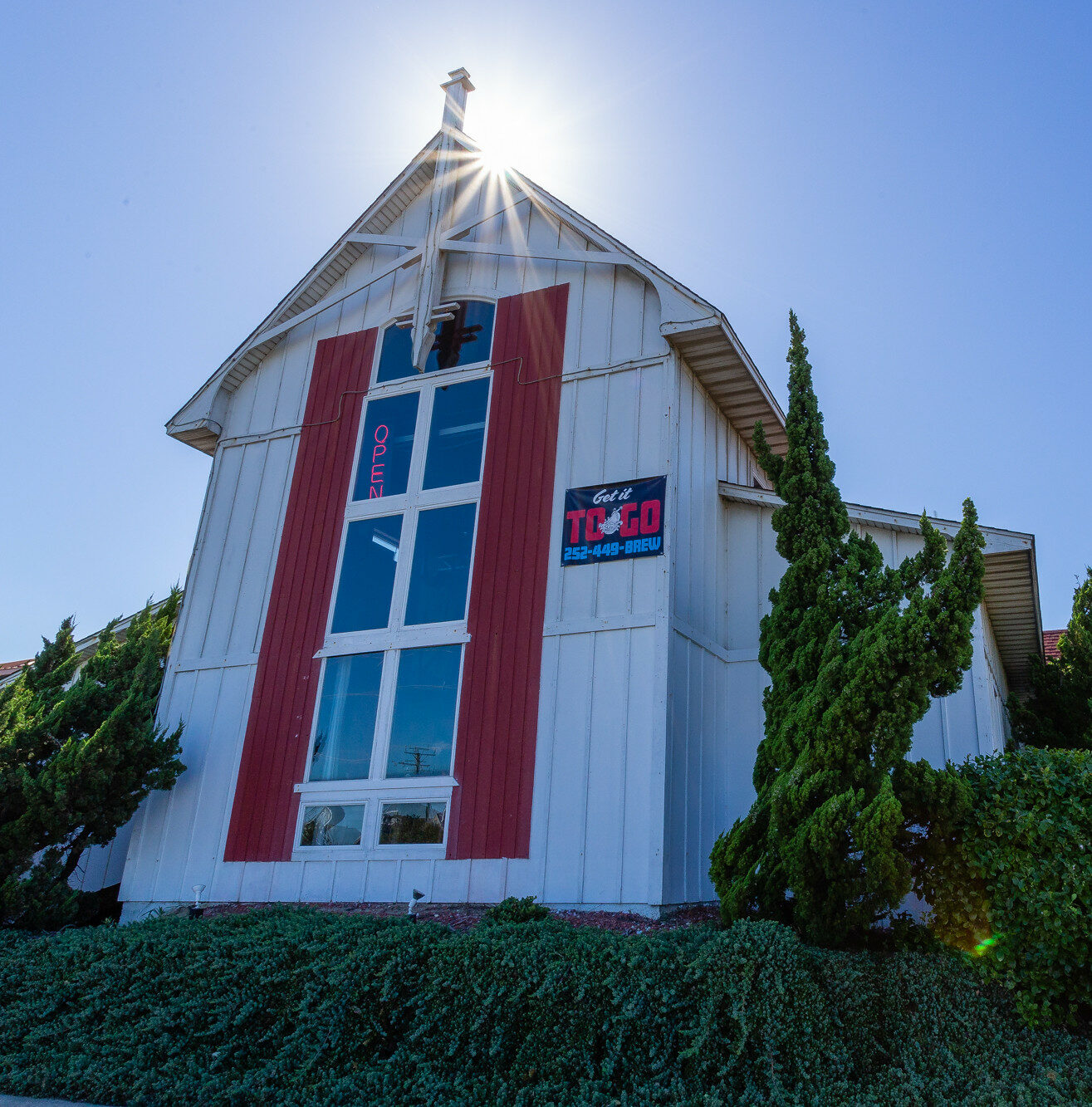 The wind turbine is a large part of Outer Banks Brewing Station’s story, but we’ll start at the beginning. In 1992, OBBS owners Eric Reece and Aubrey Davis had the idea for the restaurant and brewery when they were together in the Peace Corps in Thailand.

Eric started brewing beer in California in the early to mid-1990s. Eric moved to the Outer Banks in 1997 with Tina Mackenzie, his wife, who is the baker at the restaurant. Aubrey grew up in mainland North Carolina, and he had the idea to start the brewery on the Outer Banks. Eric and Aubrey both feel that they continue to try new things and embrace change at the restaurant and brewery. The food, beer, and music at Outer Banks Brewing Station have evolved over the years. If you’ve visited the establishment throughout the years, you may recognize some of the same faces working there year after year, as several staff members have worked there for a long time.

Eric and Aubrey had the goal of creating a restaurant that was also very involved in the community. Outer Banks Brewing Station is not only known for its beer, food, and music venue, but also for its involvement in the local Outer Banks community. The restaurant and its backyard have hosted many benefits for different people in the OBX community. About 25 community events are held every year at the Outer Banks Brewing Station, and the pub is very involved with the Surfrider Foundation and beach clean-ups.

“Being part of the community is always what we have tried to become, and I feel that we have achieved that.”

Outer Banks Brewing Station’s beer selection is constantly rotating. Eric works very closely with the head brewer, keeping the beer selection fresh by continually changing. They offer just one of their house-made brews all year-round: Olsch, which is a Kolsch style beer. At any time, their house-made beer menu will include wheat beer, brown ale, Saison, stout, and/or seasonal beers, such as Oktoberfest. During the summer of 2020, they brewed their first Perry, a gluten-free hard cider made using muscadine grapes, which grow on the fence in their backyard, and peaches. 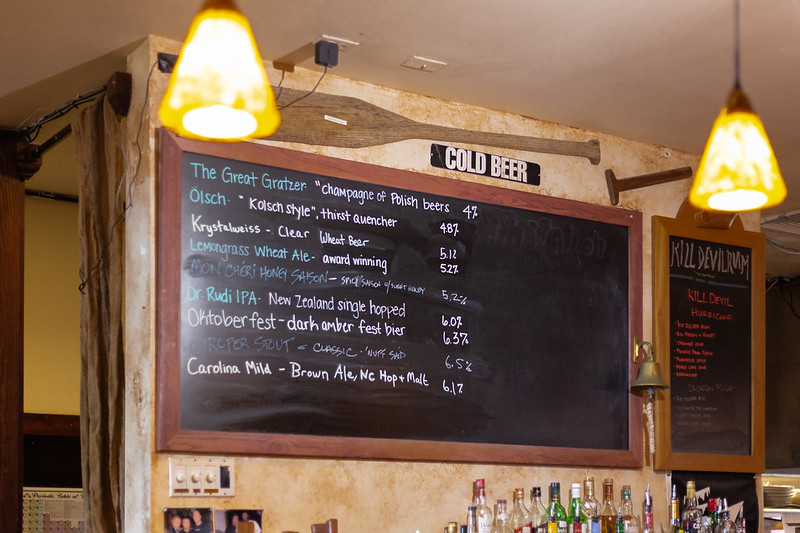 ”I think at this point the Beer Church here, is integrated into Outer Banks lore.”

From Pasture to Plate

The chef and the brewer at Outer Banks Brewing Station work closely together to use the beer in the food and vice versa. The chef may choose to use smoke malt in certain foods and prepare foods that can pair well with the beers currently on tap.

When beer is made, there is a grain by-product created in the process. OBBS gives the grain by-product to a fifth-generation farmer in Elizabeth City, NC, who feeds it to his cattle. The Outer Banks Brewing Station then purchases the beef, by the entire cow, to serve at the restaurant. The menu includes traditional and creative dishes, and there are a variety of options for children and vegetarians.

“We try to have that connection to food that many people have lost.”

The music scene at Outer Banks Brewing Station evolved organically, as they did not open the brewery and restaurant with intentions of being a nightclub. The genres of music were carefully selected, for example, back in 2002, they hosted a jazz fusion group with a live DJ when nearby places were offering party rock and covers. Bands with different styles of music have graced the stage at the Outer Banks Brewing Station. The Backyard has also hosted a fair share of bands or solo acoustic gigs. 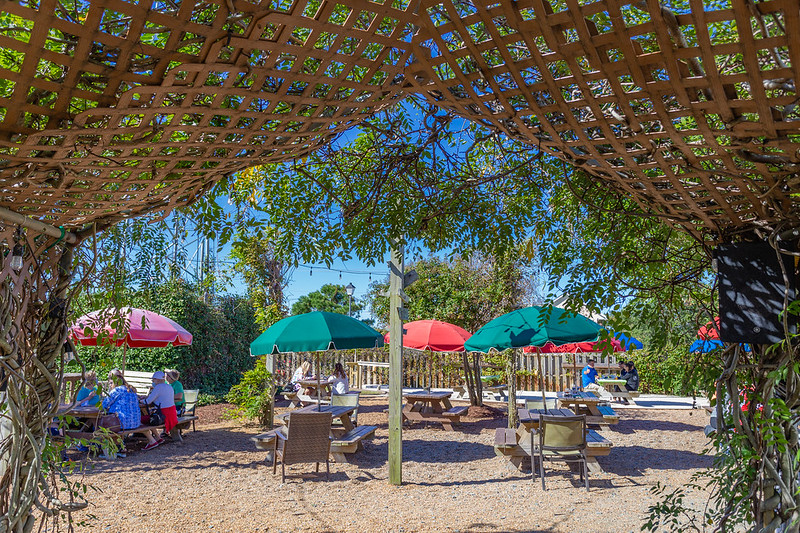 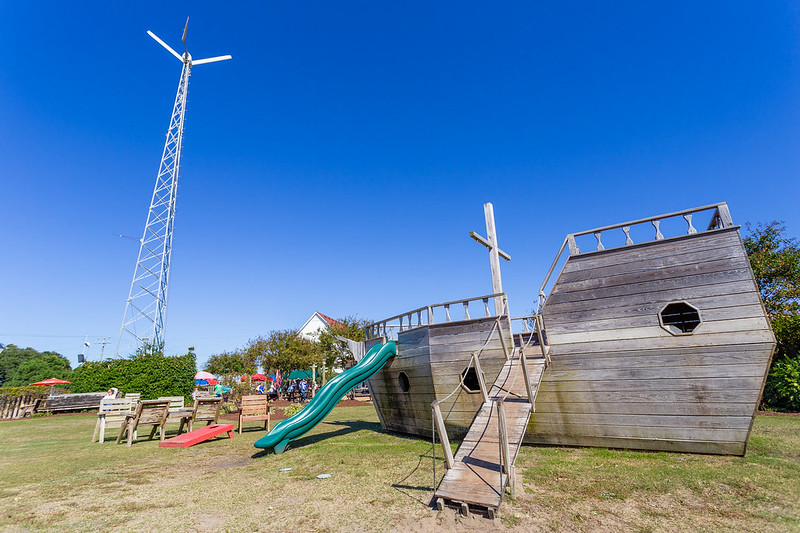 What began as a unique space for the first wind turbine on the OBX has evolved into a family-friendly area, great for playing and relaxing with friends while enjoying live music. The backyard is fenced, with a gate to the parking lot and a door into the restaurant. Parents can enjoy a beverage at the picnic tables while watching the kids playing in the yard or on the big pirate ship playset nearby.

Outer Banks Brewing Station currently operates at 50% capacity, and they check in all patrons at the door before allowing entry to the restaurant. The restaurant is spacious, so they are able to easily space out tables. Stools at the bar have been reduced and glass barriers have been installed to separate booth tables.

The backyard is more popular than ever before, as more events are being hosted outside. Outdoor seating in the backyard was already socially distanced. 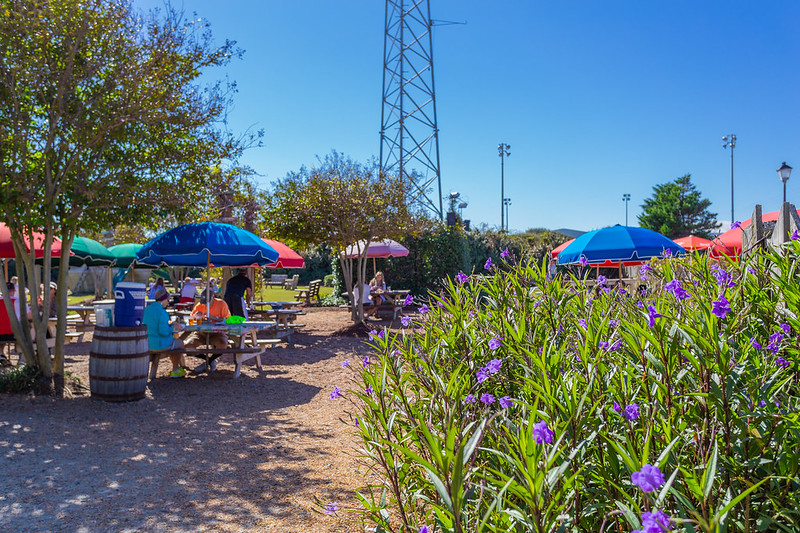 Check out some of the Outer Banks’ unique art galleries while working up your appetite. Gallery Row, located just a few miles south of Outer Banks Brewing Station, has amazing local art and souvenirs. While you are exploring Gallery Row, be sure to stop by one of our favorites, Seaside Art Gallery.

"Outer Banks Brewing Station: Innovation Pioneers on the OBX" with your friends and family: