Why Vacation on the Outer Banks 4×4 Beaches?

Get Away From it All 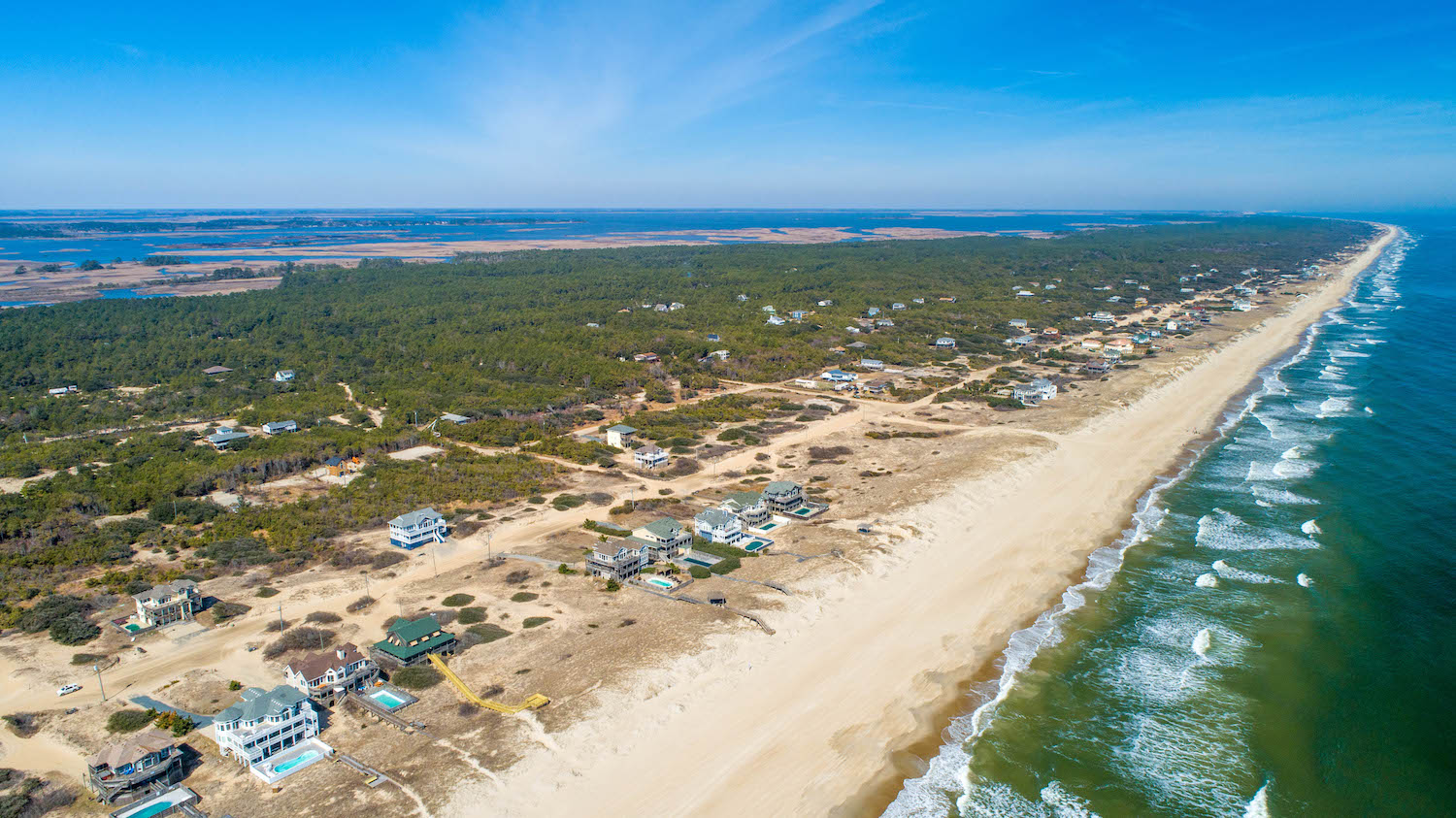 Why Vacation on the 4×4 Beaches?

✅Unlike any other OBX town – no paved roads, no shops and no restaurants!

✅Plenty of space and less people – easy to social distance!

A Brief History of Carova Beach

In the 1500s, Spanish explorers, led by Lucas Vasquez de Allyon, came to modern-day Carova Beach and were forced to abandon their Spanish mustangs due to pugnacious natives. These wild Spanish mustangs still roam the 4×4 beaches today. By the 1660s, a small group of settlers began to inhabit the region. After a few centuries of stagnant population growth, Currituck finally experienced growth with the establishment of five Life Saving Stations: Wash Woods, Penny’s Hill, Poyner Hill, Seagull, and Whalehead which brought new inhabitants and servicemen to the area.

Fun Fact: The Twiddy family purchased the Wash Woods Lifesaving Station in 1988 and restored it!

The 1920s brought the first glimpse of a community with the construction of a schoolhouse, post office, and two churches. However, restrictions on hunting and fishing due to federal legislation and World War II caused the population to dwindle. In response, all five of the lifesaving stations closed. Throughout the 1960s, 1970s, and 1980s, Carova Beach was home to a small population of residents. It wasn’t until the development boom in the 1990s and 2000s that Carova began to be the vacation destination that it is today. Now, hundreds of vacation homes sparsely fill the stretch of 4×4 beaches known as Carova Beach. 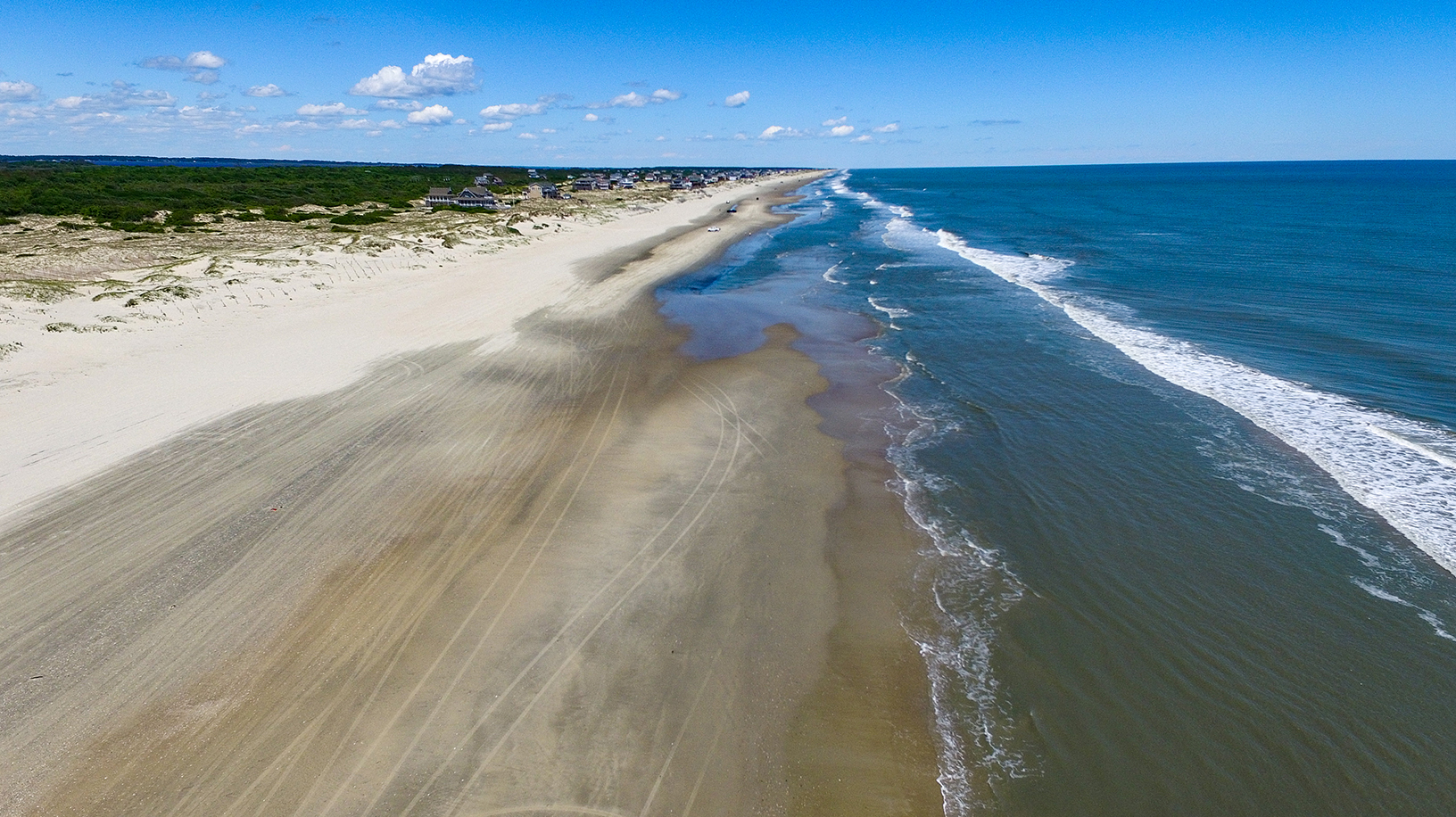 Carova Beach begins as soon as Highway 12 ends. With no paved roads connecting Carova Beach to Corolla, all residents and visitors must access Carova Beach by four-wheel-drive vehicles. As you drive north up the beach, you pass the communities of Ocean Beach, Penny’s Hill, Seagull, Swan Beach, North Swan Beach, and, finally, Carova Beach. You will soon realize that there are no restaurants nor shops, just clusters of vacation homes. The absence of all commercial activity makes the 4×4 beaches such a unique vacation destination – the ultimate place to relax!

This uncomplicated area is made up of dense maritime forests, marshy soundside coves, and protected nature preserves. Home to the Corolla wild horses of Currituck County, the 4×4 beaches make the extraordinary possibility of catching a glimpse of these unique creatures practically commonplace whether on the beach or in the yard of your 4×4 vacation rental! There are fences at both the north and south end of Carova Beach that keep the wild horses contained and protected. Also, be on the lookout for seals, whales, and dolphins! 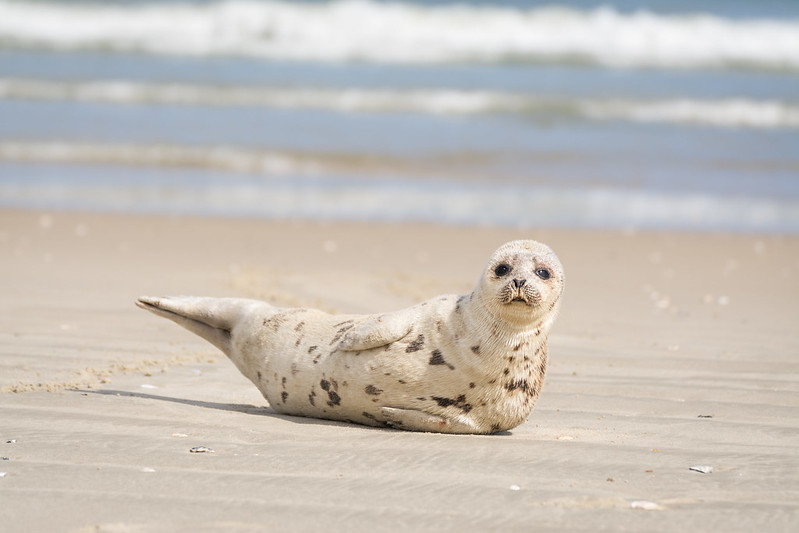 One of the last and least developed areas of the Outer Banks, vacation rental homes on the 4×4 beaches range greatly in size, available amenities, and cost. This special area of the OBX is the perfect vacation spot for families looking to spend more time together, artists seeking inspiration and solitude, and for those seeking a more adventurous beach vacation. Twiddy & Company invites you to experience the hidden treasure of the Outer Banks…the untouched, wide-open rarity that is Carova Beach!

If you’re coming with just a few family members:

A four-bedroom semi-oceanfront home located in Swan Beach. Approximately 3.5 miles up the beach. 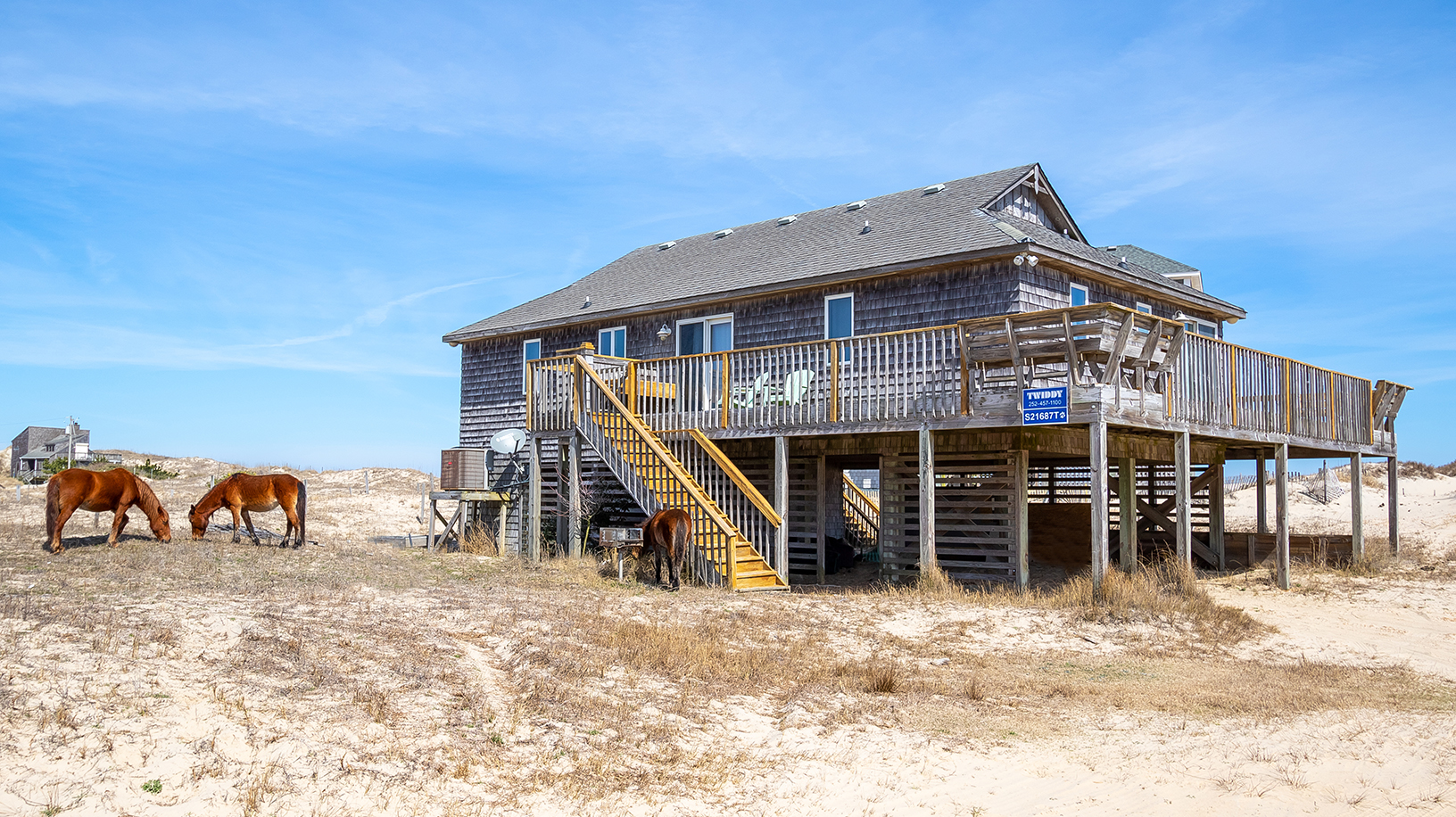 If you’re coming with your extended family:

An eight-bedroom oceanfront home located in Ocean Beach. Approximately 2.3 miles up the beach. 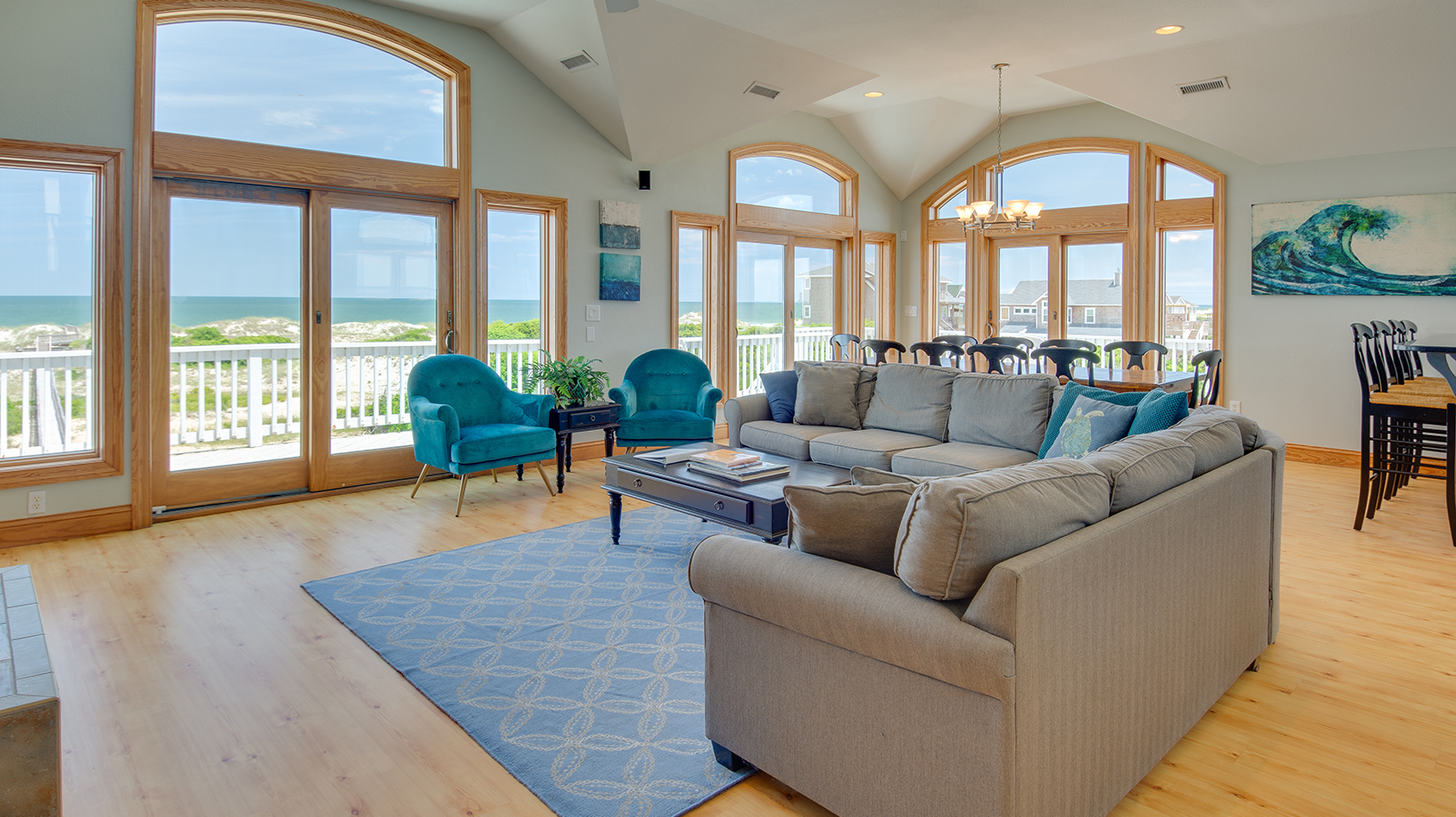 If you’re coming with multiple families and friends: 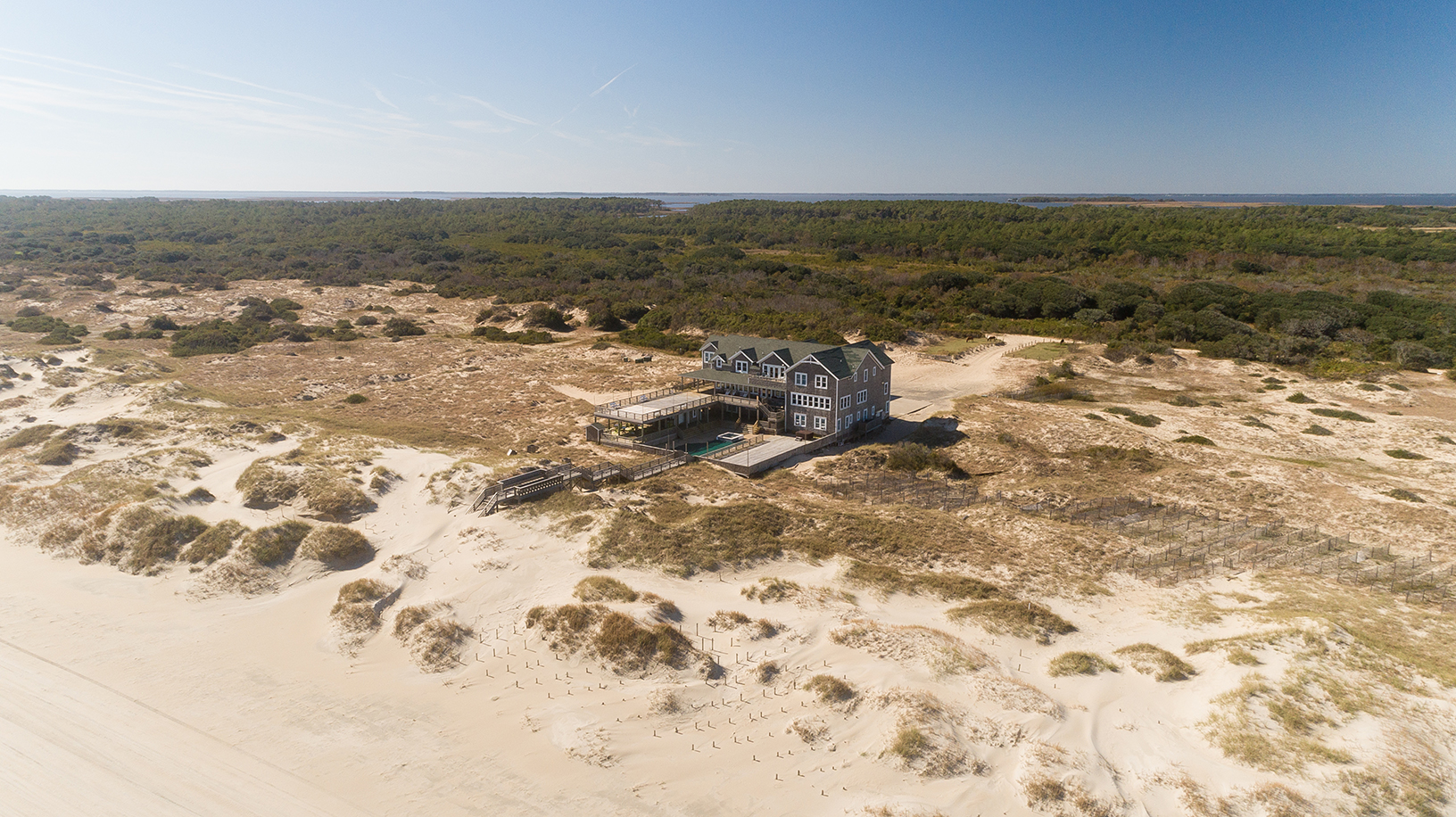 Fun things to do:

"Why Vacation on the Outer Banks 4×4 Beaches?" with your friends and family: