Jingle All The Way 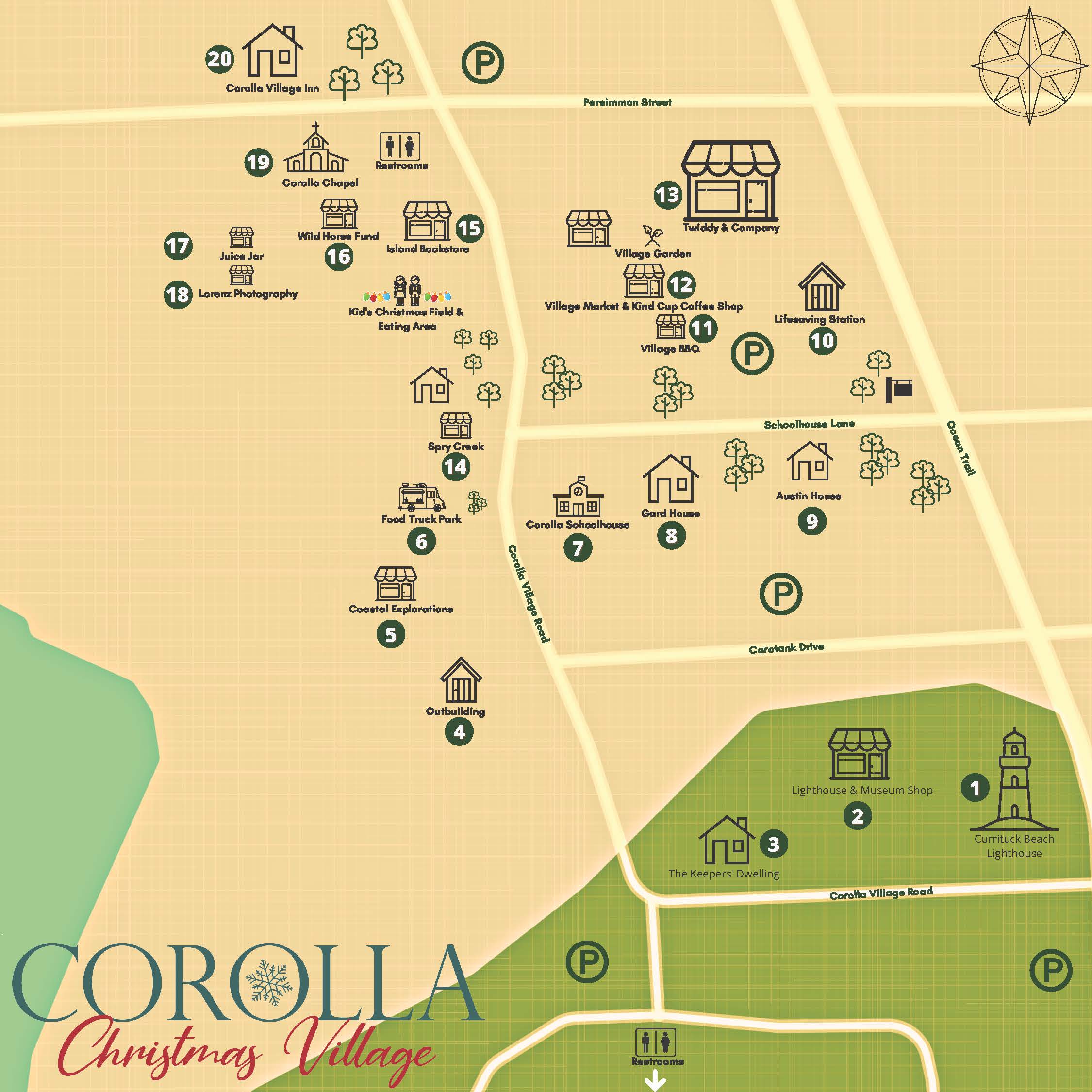 1. Currituck Beach Lighthouse – Since 1875, this lighthouse has kept mariners from danger, night and day. There are 220 steps leading to the top. Visit obcinc.org for hours and admission information. 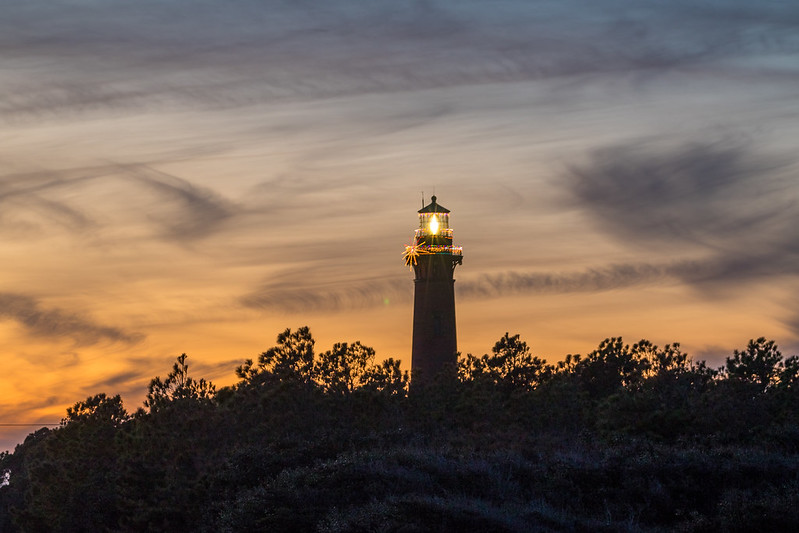 2. * The Lighthouse & Museum Shop – The Little Lighthouse Keeper’s House at the Currituck Beach Lighthouse Station is a museum shop that delights anyone who loves lighthouses, and not just the one that lights the northern Outer Banks. The shop is open nightly each weekend during the Corolla Christmas Village event.

3. The Keepers’ House – The Keepers’ House has accommodated more than two dozen families, as their duties of “Lighthouse Keeper” were carried out. Identical Keepers’ Homes were built at three other light stations — Morris Island and Hunting Island in South Carolina and Piedras Blancas in California. None of these other three dwellings are extant.  The Currituck Beach Lighthouse still has on-site lighthouse keepers (who have two children and a lighthouse dog who watches guard!).

5. Coastal Explorations – Closed for the season, Coastal Explorations is an outdoor touring company dedicated to providing adventure, education, and entertainment fueled by the resources in its own backyard. Rentals and tours include kayaking and stand-up paddleboarding. 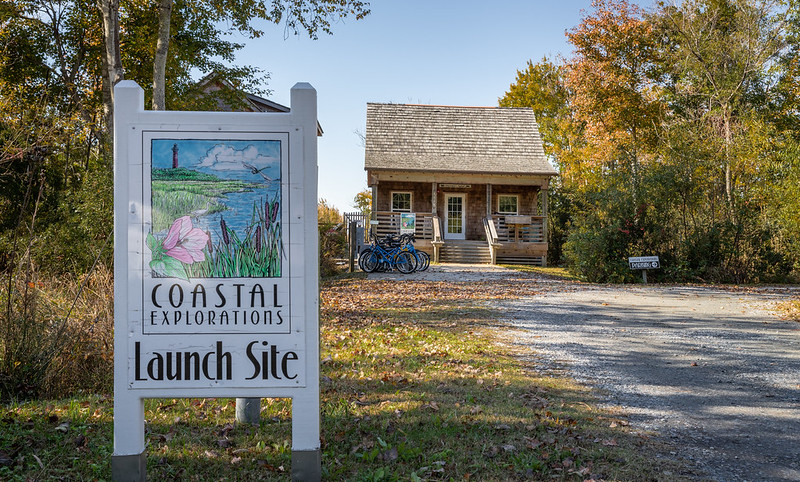 6. * Food Truck Park – Each weekend during the Corolla Christmas Village event, local food trucks will offer a variety of savory and sweet menu options. Picnic tables are located throughout the village.

7. * Corolla Schoolhouse – The old schoolhouse in Corolla was built in the late 1800s, closed in 1957, then reopened for local children once again in 2012.  Today, Water’s Edge Village School provides local education for K-8 students in its isolated coastal community, a place rich in natural resources and environmentally-focused organizations. The schoolchildren will host a bake sale during the Corolla Christmas Village event. 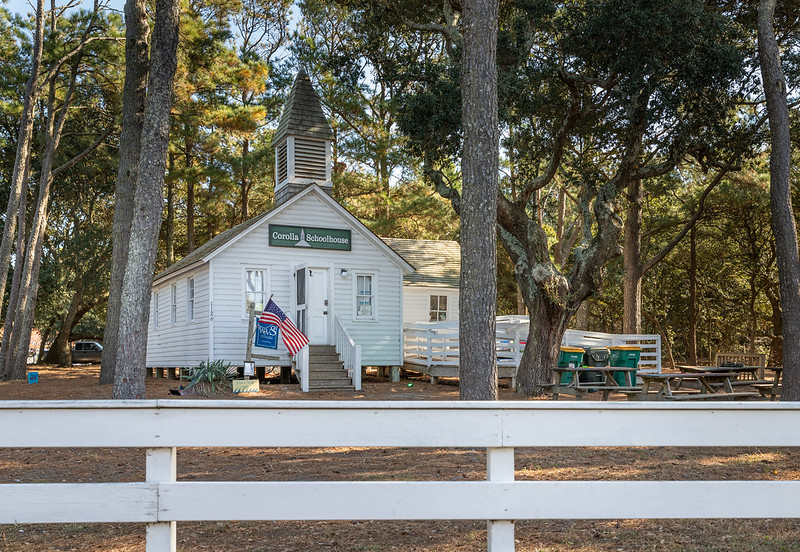 8. Gard House – A fine example of traditional “Nags Head Style” vernacular, a striking contrast to the white clapboard cottages indigenous to Corolla village. Built in Kill Devil Hills by the Gard family of Elizabeth City as a vacation retreat in 1936, the house was sold to the Twiddy family in 2000 who moved the home to its current location.

9. Austin House – This modest one-story house was originally a barracks house and workstation for the Navy. The house was later sold to Gene and Shirley Austin. Gene was a caretaker of the Whalehead Club and keeper of the Currituck Beach Lighthouse from 1964-1990. Today, it remains a private residence. 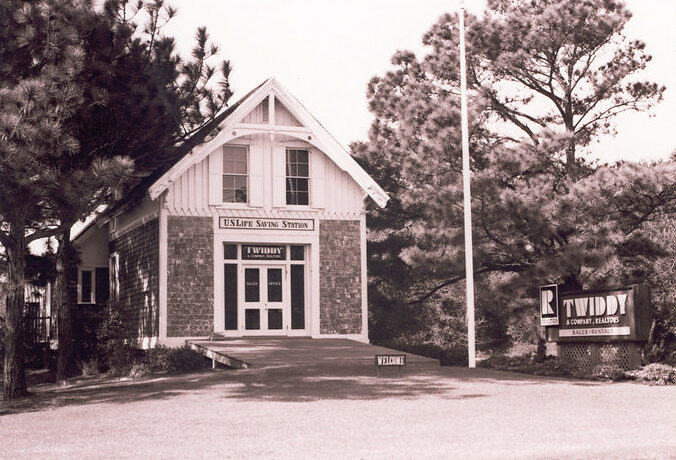 12. * Corolla Village Market & Kind Cup Coffee Shop – Local art, coffee, goods, and crafts are just some of the wonderful items you can purchase inside of this historic building. Built in the early 1900s and known fondly as “The Parker House,” the Parker family planted their roots in the heart of the Village and made this house their home. Corolla Village Market & Kind Cup Coffee Shop are open during the Corolla Christmas Village event, so come in, grab a hot cup of coffee, and browse (and purchase) the handiwork of more than 30 local creatives. 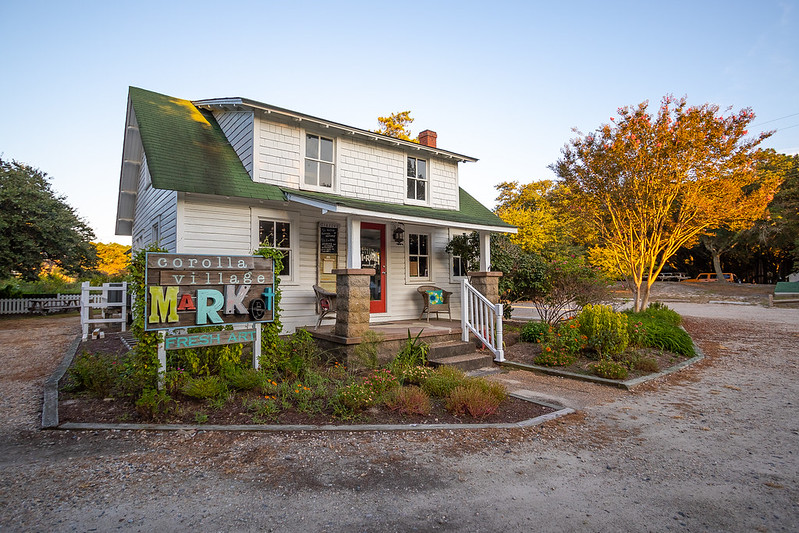 13. Twiddy & Company  – Founded in 1978, Twiddy & Company is the premier vacation rental and sales company on the Outer Banks. Today’s company is a campus-style collection of more than six professional offices that stretch from Duck to Corolla and a dozen historically preserved and active buildings. The company manages more than 1,100 beautiful vacation homes. Together with the Currituck County Department of Travel & Tourism, Twiddy & Company is a proud sponsor of Corolla Christmas Village. 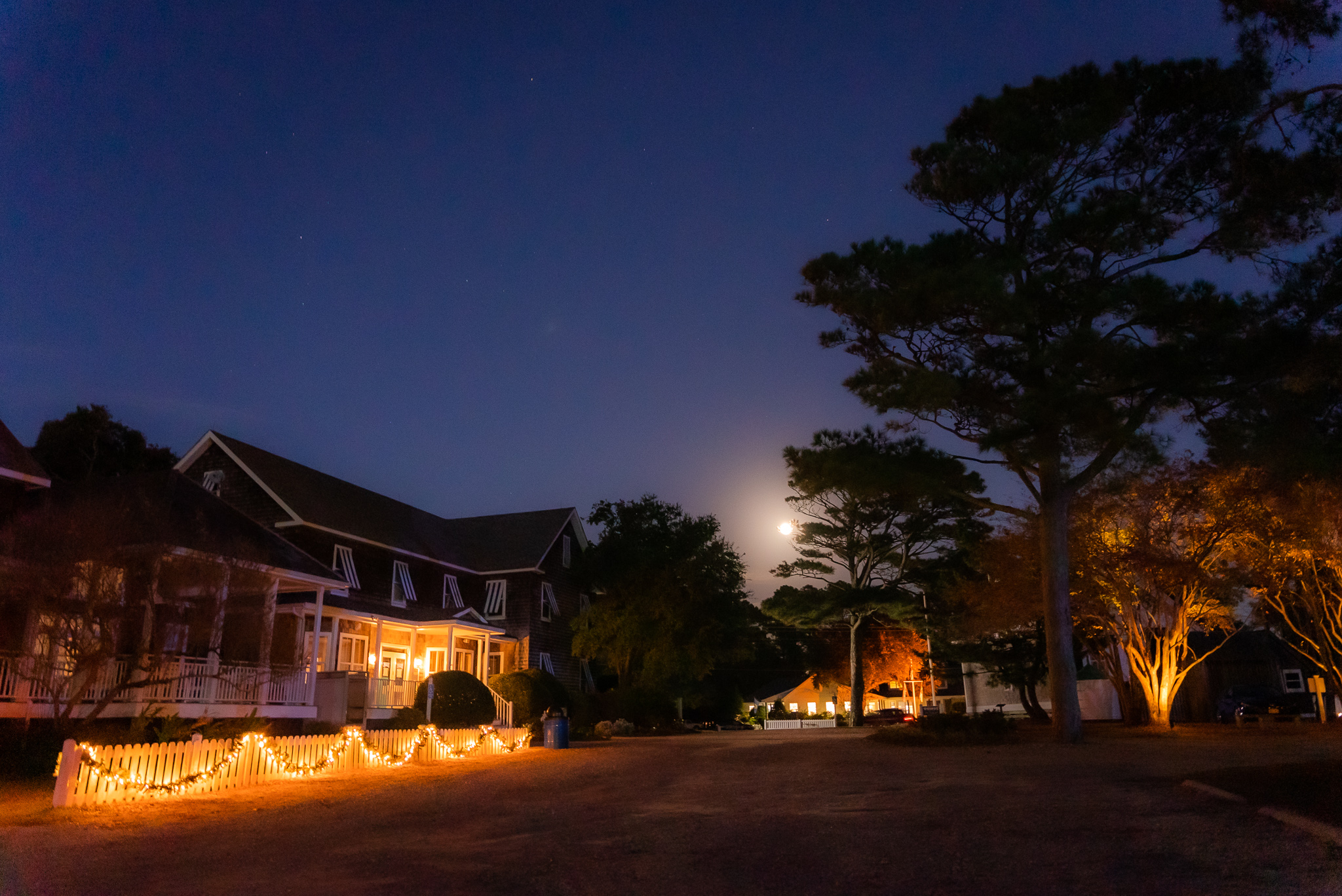 14. * Spry Creek – Named after the creek just northwest of the shop, Spry Creek is owned by native Outer Banker Karen Scarborough Whitfield and husband John who converted Karen’s dad’s old garage into a fun and interesting boutique for gifts and accents for yourself, garden, and home. The shop will be open on select weekends during the Corolla Christmas Village event. 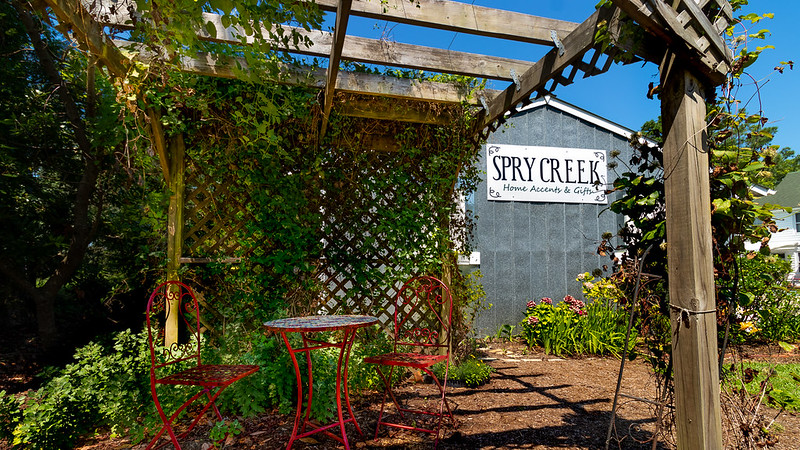 15. * Island Bookstore – A small independent bookstore with a fantastic selection of reading material. The store is built on the former footprint of a general store. The two-story building is intended to replicate the building which inspired its design. Open nightly on Friday and Saturday for the Corolla Christmas Village event. 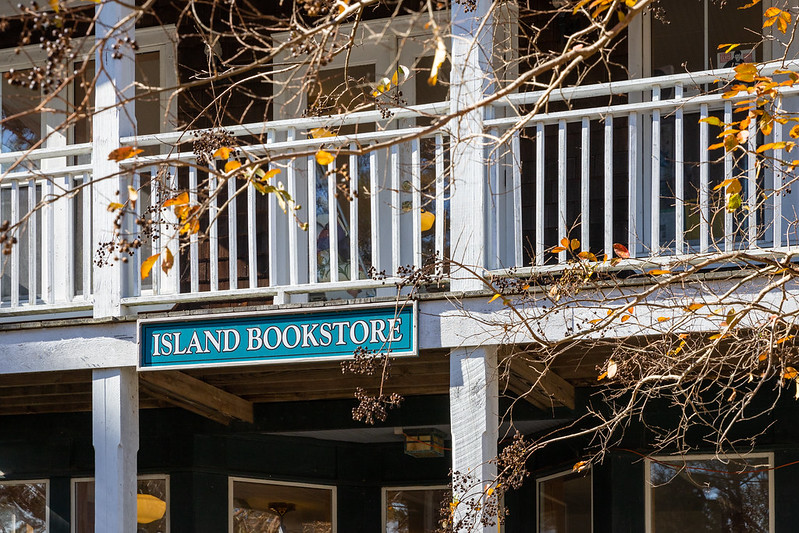 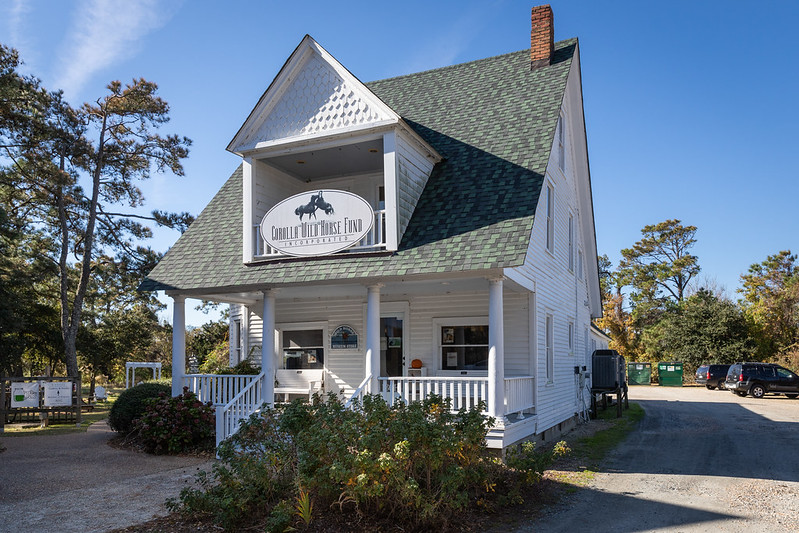 19. * Corolla Chapel – The chapel was built in 1885 and served the Community until 1958. It was not used again until 1987 when a new congregation was established. In 2002 a large addition was built to accommodate the growing attendance. The interior of the new addition was built to resemble the style of the original section, even replica pews were installed. Corolla Chapel is the only year-round Church in Corolla (Interdenominational). It is open each weekend during the Corolla Christmas Village event and has generously made its restrooms available to the public. The chapel will host its annual Christmas Eve service this year. 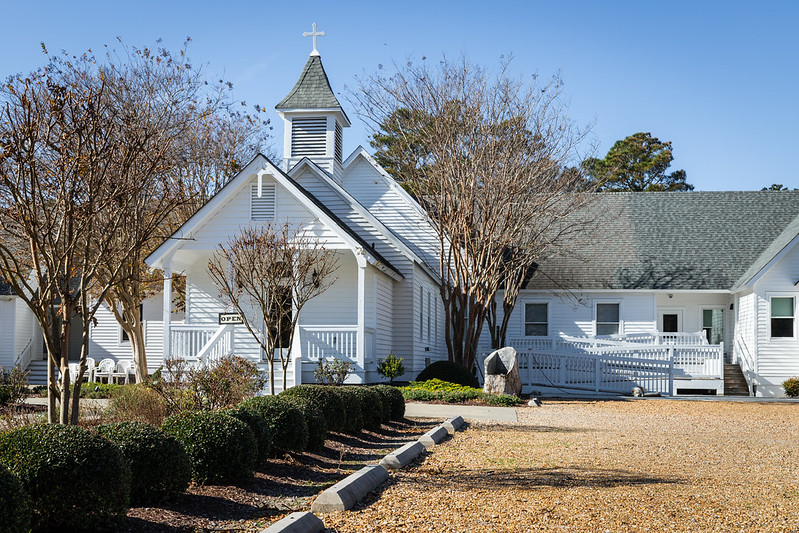 20. Corolla Village Inn – This newly-constructed Inn offers nightly rentals on the Outer Banks and welcomes travelers searching for a comfortable yet classic space, friendly staff, and an appreciation for attention to detail. The Inn is closed for the season and reopens in February 2022.

"Walking Guide to Historic Corolla Village" with your friends and family: