We are currently experiencing high call volume. It is important to us that everyone gets the assistance they need. If you are not traveling within the next two weeks, we ask that you contact us closer to your trip to allow us to prioritize those with more immediate travel plans. In the meantime, please click here to view the latest information regarding Coronavirus (COVID-19) on the Outer Banks. Thank you for your patience. 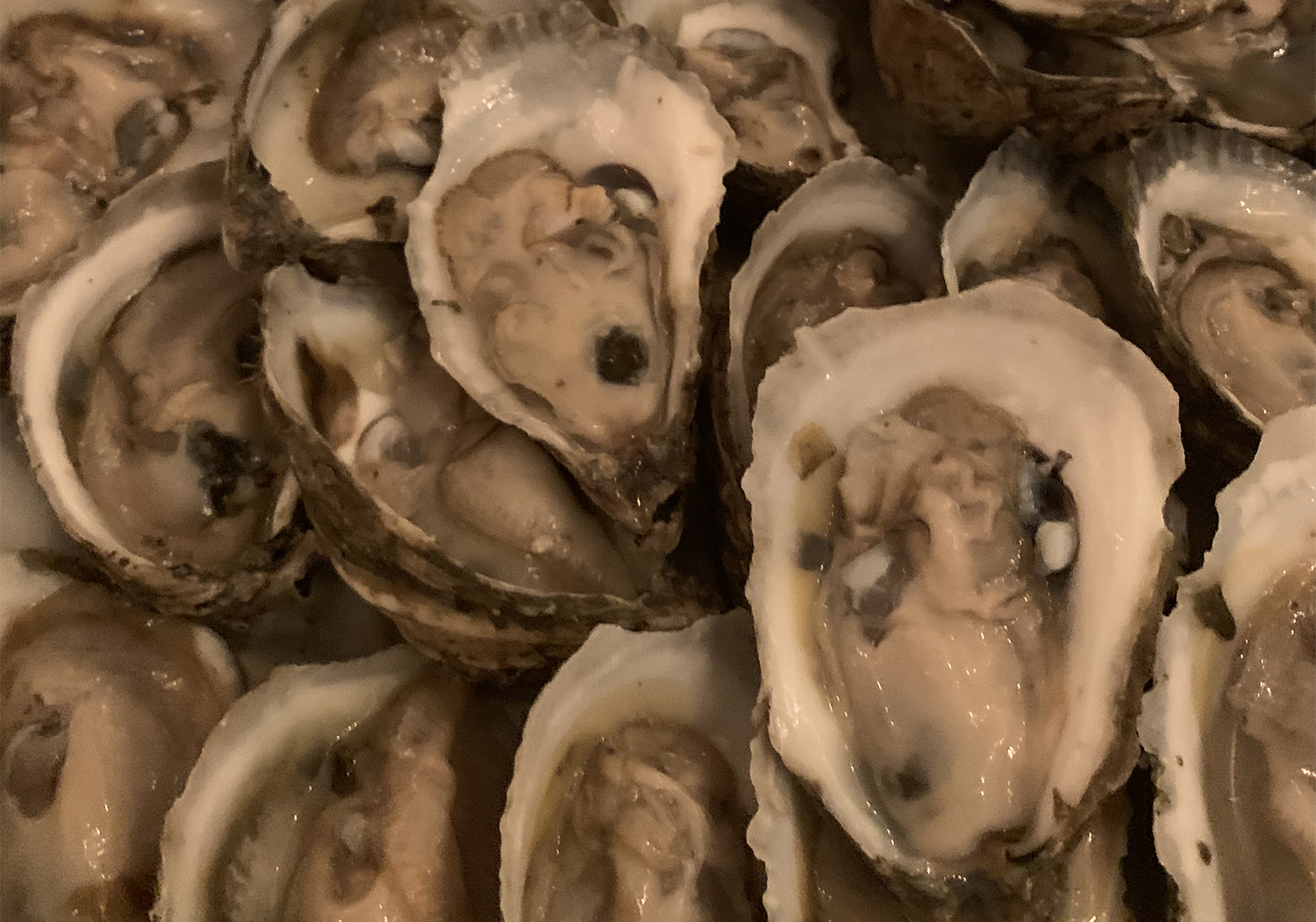 Oysters are a favorite delicacy with Outer Banks locals and visitors. If you’ve ever wondered where oysters come from or where to find oysters on the OBX, keep reading! We’ve also included some of our favorite oyster recipes and local restaurants for some recommendations on getting your oyster fix.

Where Oysters are Found

Where to Buy Oysters

How to Shuck Oysters 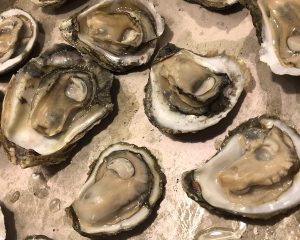 What Types of Oysters are Found in the Waters Around the Outer Banks?

Eastern Oysters (Crassostrea virginica) are found in Outer Banks waters and along the North Carolina coast. This type of oyster gets its flavor from its location. Shape, size, texture, saltiness are all determined by where the oyster is found, which results in many different varieties of Eastern Oyster. Most oysters are harvested around three years of age.

Where Do Oysters Come From?

Oysters live in brackish and salty waters on hard, submerged surfaces. Wild oysters cluster together as they grow, forming reefs that are essential habitats for other marine life. In recent years, oyster farming has become a popular method of growing oysters for food.

When are Oysters in Season? 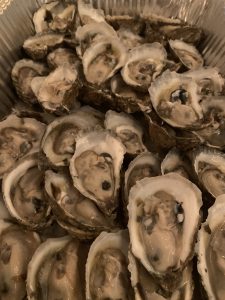 The old saying goes “only eat oysters during months with an ‘R’ in them.” Basically, the traditional rule for eating oysters was to not eat oysters from May through August. In the past, eating oysters during the summer months was not recommended due to potential food safety issues due to bacteria and certain toxic forms of algae that occur in higher concentrations when the water is warmer. Also, wild oysters reproduce during the summer due to warmer water temperatures, which gives them a thinner, more watery consistency.

With the rise in oyster farming and more stringent environmental rules and enforcement, the old saying doesn’t necessarily apply to all oysters anymore. Farmed oysters are considered safe to eat year-round. Farming allows for more control and monitoring of the oysters’ environment. Oysters can be farmed in areas where the water is colder. Many farmed oysters are bred to be sterile, so they do not spawn in the summer and stay plump all year long. This is similar to many types of fruits and vegetables that are bred to be sterile, like seedless grapes. The additional monitoring of water quality also contributes to the benefits of oyster farms. Harvesting regulations and improved food safety practices allow for farmed oysters to be eaten year-round. As always, be cautious when consuming raw seafood during any time of year.

Wild oysters are harvested in shallow waters and intertidal areas along the NC coast, though some can be found in subtidal reefs in deeper water. Oysters are collected with tongs, bull rakes, by hand, or, in some cases, by dredge. When oysters are in the early stages of life, they are carried around by currents. Oysters sink to the bottom as they mature. Landing on a hard surface is essential to the oyster’s survival, which is why oysters can be found growing together, either in clumps, on rocks, or on reefs. 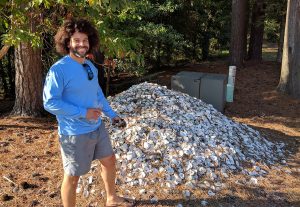 Farmed oysters are grown in their natural environment. However, unlike wild oysters, they are looked after by oyster farmers. Farmed oysters are not fed – they eat the same food as wild oysters. To shelter the oysters from predators, oyster farmers use special oyster cages to keep growing shellfish contained. Oyster cages can also keep the oysters from being covered with silt.

Ryan Bethea of Oysters Carolina cultivates oysters from farms on Cape Lookout and Harkers Island. Oysters Carolina practices impressive efforts in sustainably harvesting their oysters. They rely on kayaks to reach their oyster farms, as opposed to motor-powered boats. No mechanical devices are used to lift the oyster cages out of the water – only arm strength.

Where to Get Oysters

Oysters can be purchased and prepared at your vacation home, or you can order them at a local restaurant. The latter option is much less work, however, the adventure of purchasing oysters from a local OBX seafood market to deciding how to prepare them and then consuming them with loved ones can end up being a treasured Outer Banks vacation memory.

Where to Buy Oysters on the Outer Banks 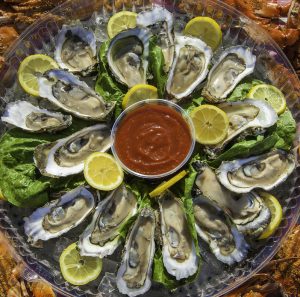 How to Shuck Oysters

“Shucking” is the term used to describe opening oysters. Oysters are shucked using a special oyster shucking knife, which normally has a round, wooden handle and a short, thick blade. To shuck an oyster, the blade is inserted where the two shells hinge. Skill and a bit of force are needed to find the sweet spot in the oyster’s hinge. Next, carefully rotate the blade until you hear a popping sound. Keep rotating the blade until you cut the muscle that holds the shell closed.

Experienced oyster shuckers find the sweet spot quickly and can open an oyster in a few seconds. Shucking steamed oysters is much quicker and easier than shucking raw oysters. Heavy-duty oyster gloves are recommended for less experienced oyster shuckers. When learning to shuck oysters, it’s easy to apply too much force, which can result in the knife slipping and cutting your hand. Oyster shells can be very sharp as well. 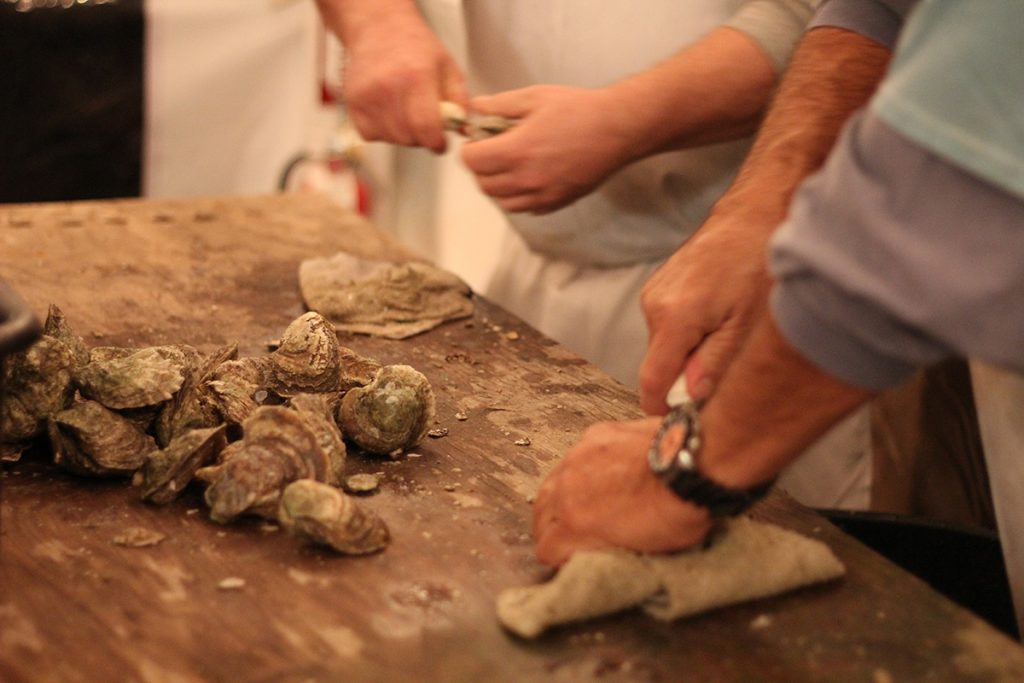 How to Eat Oysters

Eating oysters is a tradition for many families on the Outer Banks. They are fantastic as a stand-alone delicacy, but there are many excellent oyster recipes if you prefer a more balanced meal.


Where to Recycle Oyster Shells


Which OBX Restaurants Have Oysters? 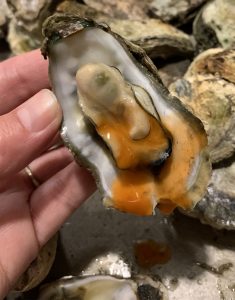 *Check out our blog post and video about Blue Moon Beach Grill.

Looking for something to eat other than oysters? 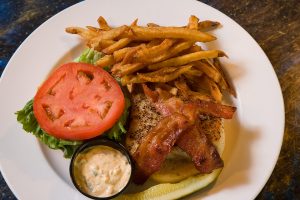 Although the Outer Banks is known for having some of the best seafood in the world, most OBX restaurants have non-seafood choices as well.