The Storms that Shape the Outer Banks

Hurricanes are part of life on the Outer Banks. A hurricane is a storm that forms over tropical or subtropical waters, otherwise known as a tropical cyclone. Hurricanes are essentially low-pressure rotating weather systems consisting of thunderstorms that form in the North Atlantic Ocean in certain conditions. Hurricanes are widely known for severe weather, including high winds, storm surge, heavy rain, and potentially tornadoes.

🌀 Fun Fact: The word hurricane was coined by Native Americans, who called the disastrous storms hurakons, after “a great spirit who commanded the east wind.” The word was picked up by Spanish explorers, who named hurricanes after patron saints if the storm occurred on their feast day. [Source: almanac.com]

What is the difference between hurricanes and tropical storms? 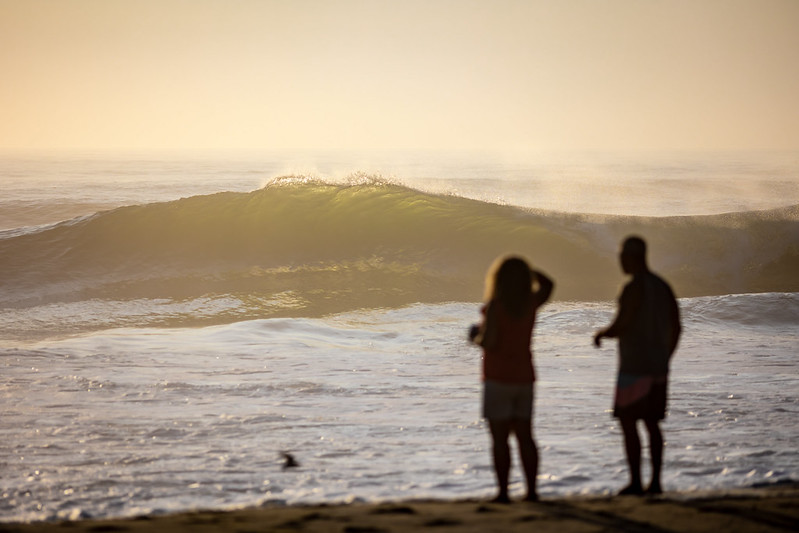 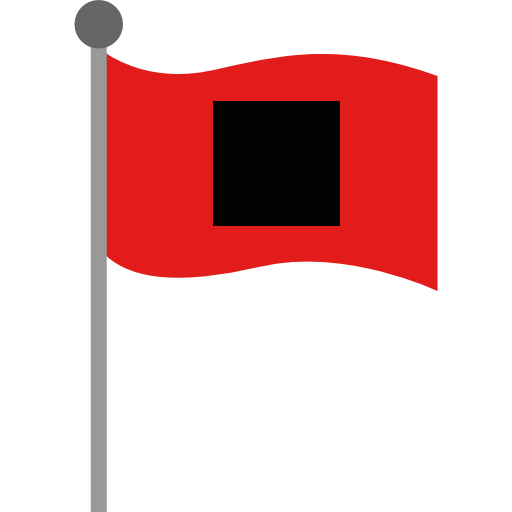 What do hurricane categories mean?

The category of a hurricane is determined by the maximum sustained wind speed within the storm, otherwise known as the Saffir-Simpson Hurricane Wind Scale. The Saffir-Simpson Hurricane Wind Scale is used to estimate possible wind damage to property for an approaching hurricane. A hurricane’s category is an indicator of the storm’s strength, however, there are other potential hurricane hazards, like storm surge, flooding, and tornadoes. 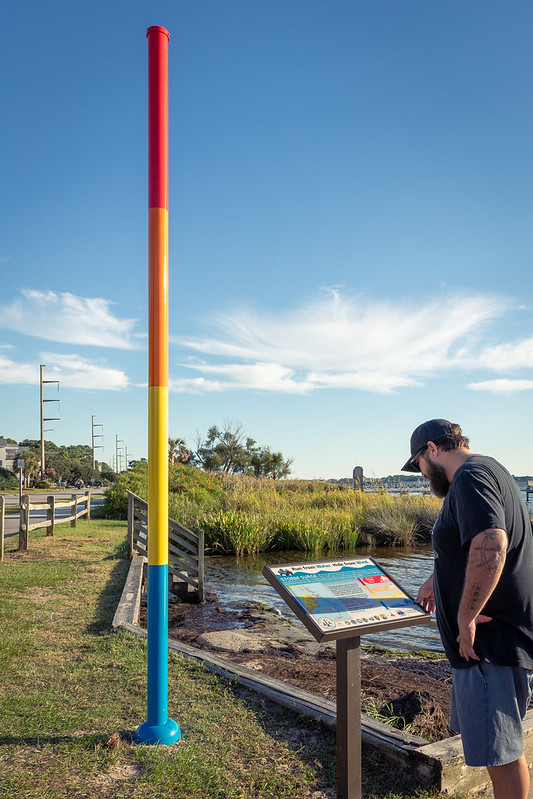 What is storm surge?

Storm surge is an increased rise in water above the normal predicted high tide level. Storm surge is caused by the strong winds of a hurricane or tropical storm pushing water into areas where it does not normally flow.

Since the Outer Banks is generally low-lying and surrounded by water, storm surge is a major concern with any approaching storm, including tropical storms, hurricanes, and nor’easters. 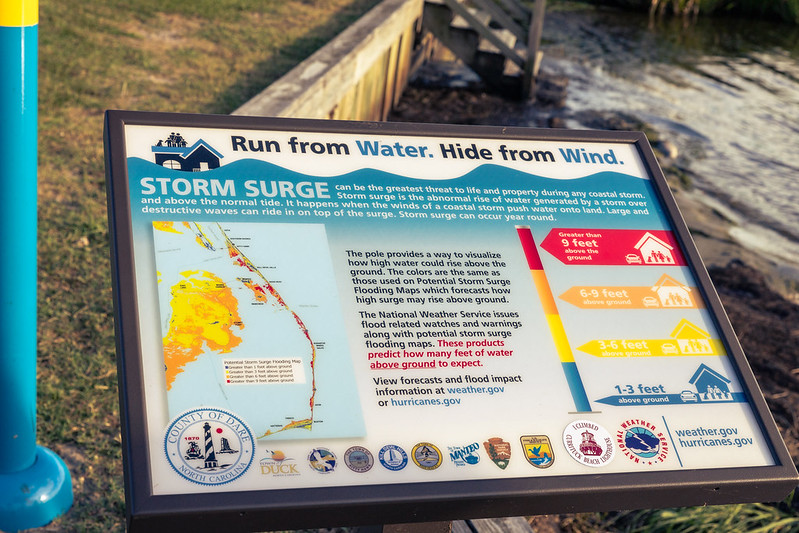 How do hurricanes get their names?

Hurricane names are chosen by the World Meteorological Organization (WMO). There are six rotating lists of names, so there may be a storm with the same name as a storm in previous years. Storms that deliver a significant impact may have their names retired and replaced with a new name on the list. Tropical cyclones receive a name once they develop into a tropical storm, with wind speeds of at least 39 mph and a rotating circulation.

The 2020 Atlantic hurricane season was the most active on record and the list of names ran out. Subsequent hurricanes were named from the Greek alphabet – Alpha, Beta, Gamma, Delta, and so on. In 2021, the WMO began providing a supplemental list of names for each year in case the season’s storms go through all of the names on the primary list. The list of 2022 Hurricane names for the season is below. 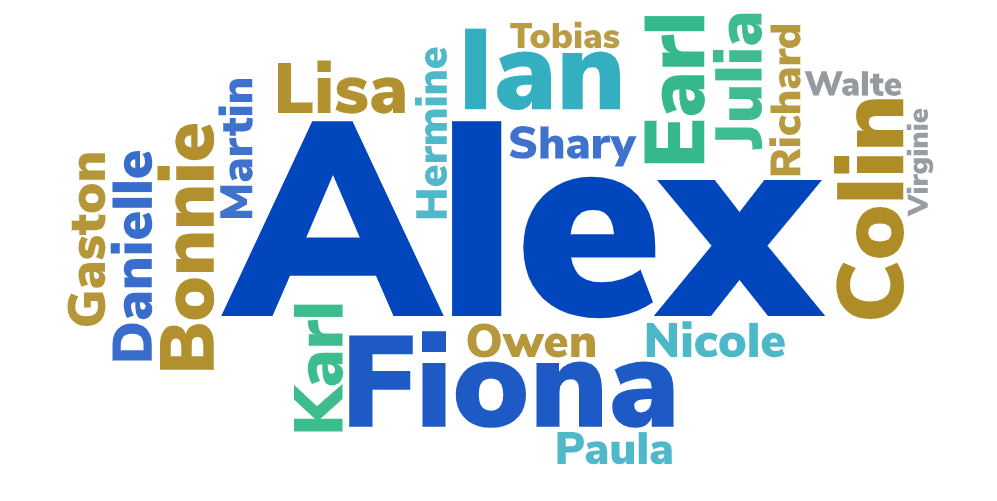 🌀  Fun Fact: Hurricane name lists have been maintained since 1953. Hurricanes were given female names only until 1979 when male names were added to the lists.

When is hurricane season in Outer Banks? 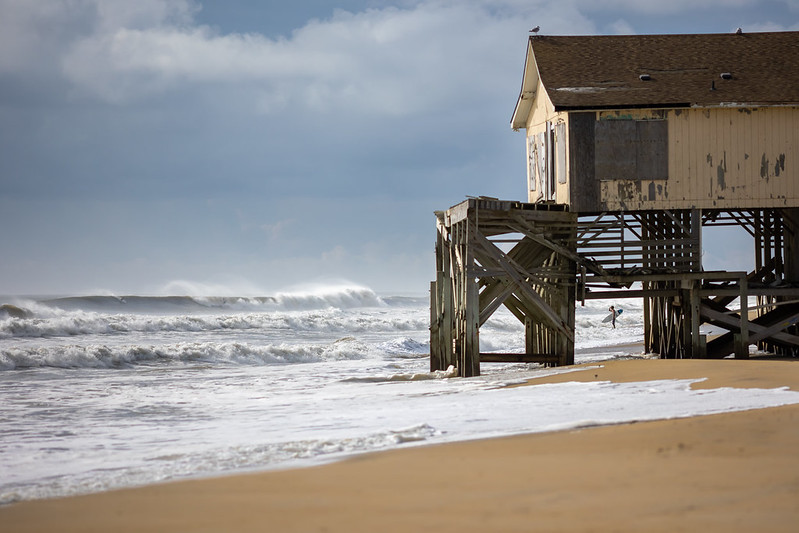 How often does the Outer Banks get hit by hurricanes?

An average of 2.3 tropical cyclones, from hurricanes to unnamed systems, affect the state each year, according to North Carolina Climate Office statistics. An average of one every other year generally makes a direct hit. 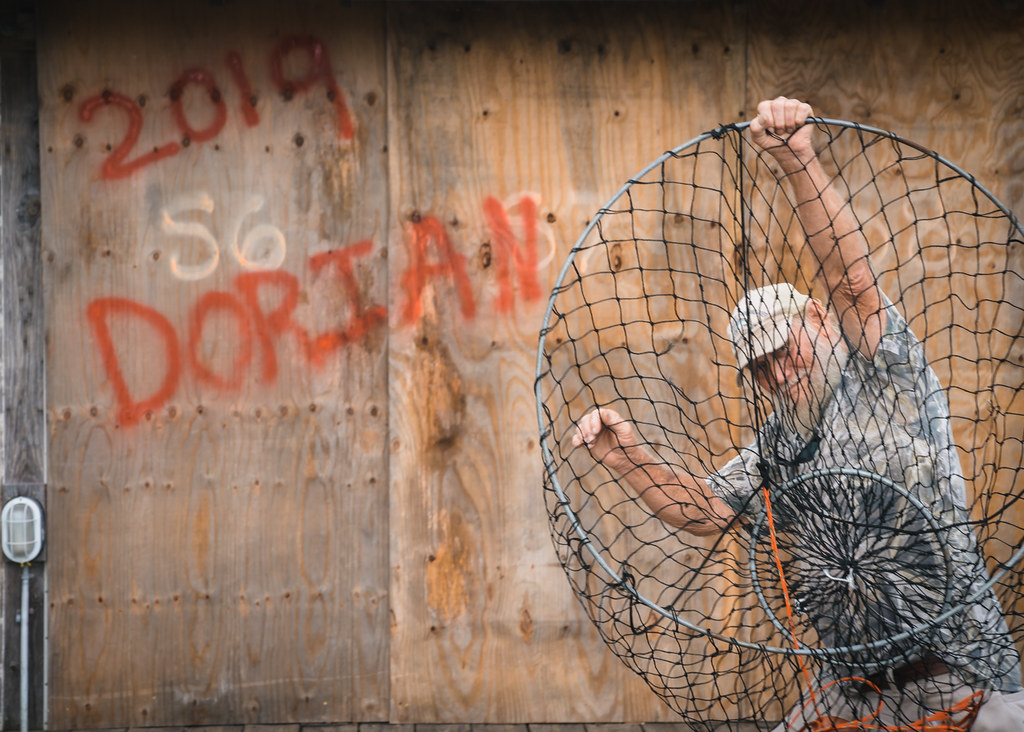 Why are hurricane evacuations ordered? 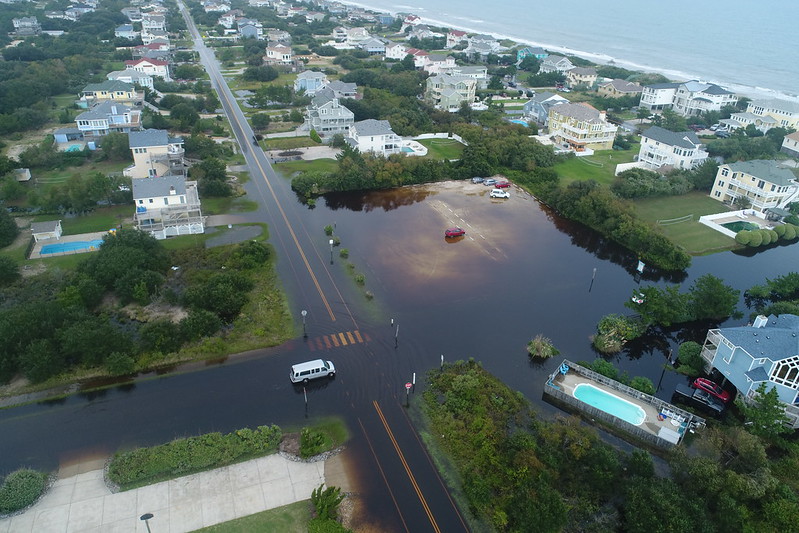 The Worst Hurricanes in OBX History

Countless storms have damaged the fragile Outer Banks landscape throughout the years. The storms mentioned below are just a few examples of powerful storms that have impacted the Outer Banks in recent years.

Hurricane Matthew packed a punch when it hit the Outer Banks in 2016. Just before the storm hit, it seemed that the OBX would be spared the brunt of the storm. In reality, 94 mph winds and over a foot of rainfall caused significant damage to the area, with the dune line and a portion of the beach road in Kitty Hawk being swept into the ocean. The estimated damage to the state of North Carolina was $1.5 billion.

Hurricane Gloria made landfall on Hatteras Island in September of 1985 as a Category 2. The storm brought a storm surge of six to eight feet and maximum winds of 104 mph. 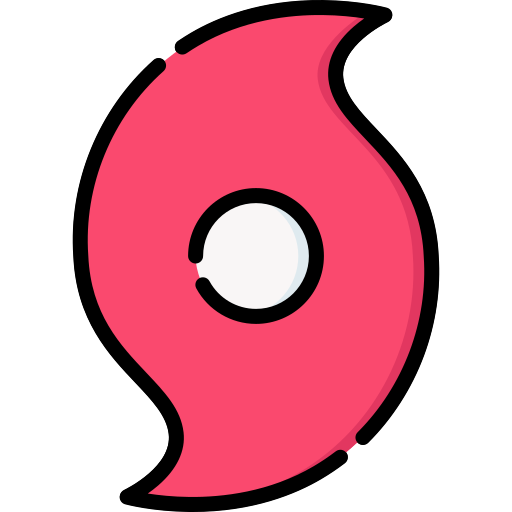 Hurricane Dorian in 2019 devastated Ocracoke Island with a substantial storm surge from the Pamlico Sound, damaging a significant number of homes and businesses with floodwaters that reached up to 7 feet. The storm also caused heavy damage to Avalon Pier in Kill Devil Hills as well as Nags Head Pier. 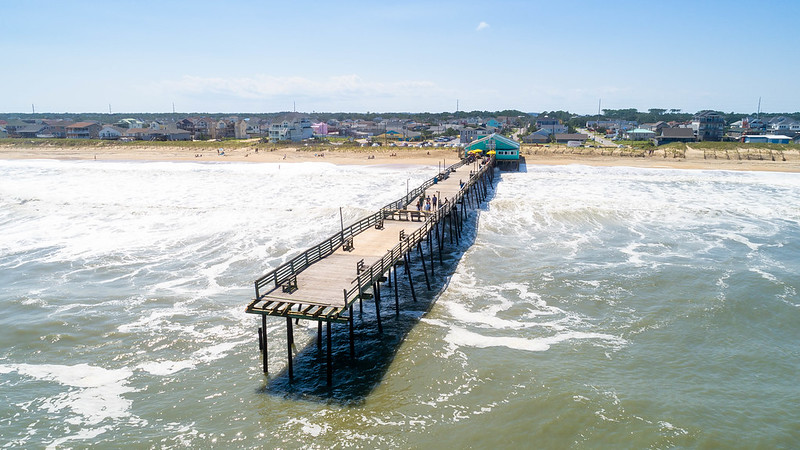 Though not a hurricane, the Ash Wednesday Storm is widely known as one of the worst storms in OBX history. The nor’easter storm blindsided the area in March of 1962, causing widespread flooding throughout the area and cutting off southern Hatteras Island with a new inlet. The duration of the storm was a major contributor to the damage caused, as well as astronomical conditions that caused the tides to be higher than normal. The storm battered the Outer Banks through five high tide cycles. 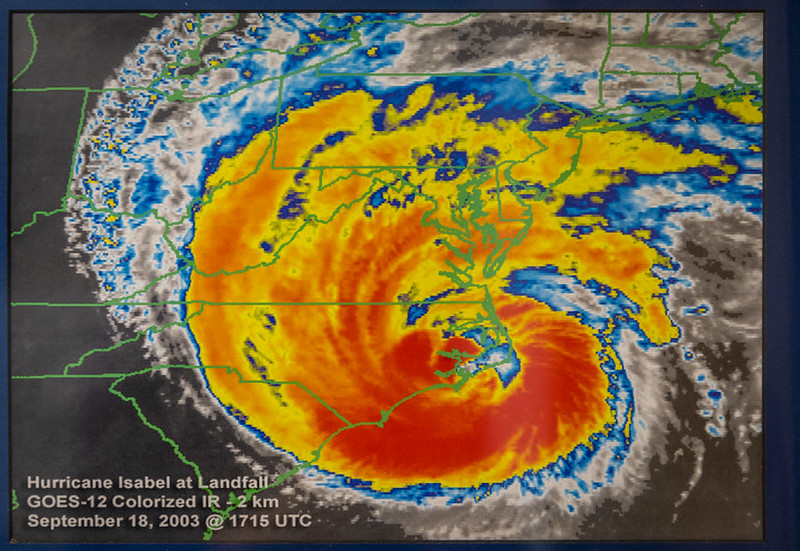 In 2003, Hurricane Isabel rocked the North Carolina coast as it came ashore as a Category 2. There was a significant loss of oceanfront homes, sand dunes, beach walkways, and roads on the OBX. Trees were down throughout the area. The storm destroyed the original Jennette’s Pier, which was first constructed in 1939, and caused an estimated $167 million in damages to Dare County, NC. 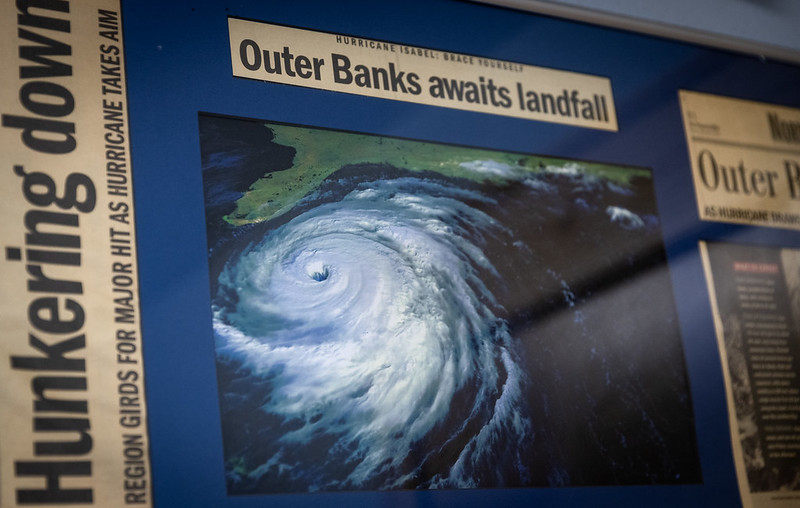 In 1996, Hurricane Bertha made landfall south of the Outer Banks on Topsail Beach in mid-July. The Category 2 storm brought 104 mph winds and a 5-foot storm surge.

Hurricane Irene came ashore at Cape Lookout and moved directly over the OBX in 2011, causing significant flooding throughout the area that damaged countless homes and washing roads out in several areas. The storm cut two new inlets on Hatteras Island, one of which was a massive inlet that is now the site of the Captain Richard Etheridge Bridge.

In 2006, Tropical Storm Ernesto initially did not seem like it would have much of an impact on the OBX, but it ended up causing a great deal of damage to the northern Outer Banks. Over a foot of rain fell, flooding roads and homes. The sand roads on the 4×4 beaches were flooded for weeks after the storm. 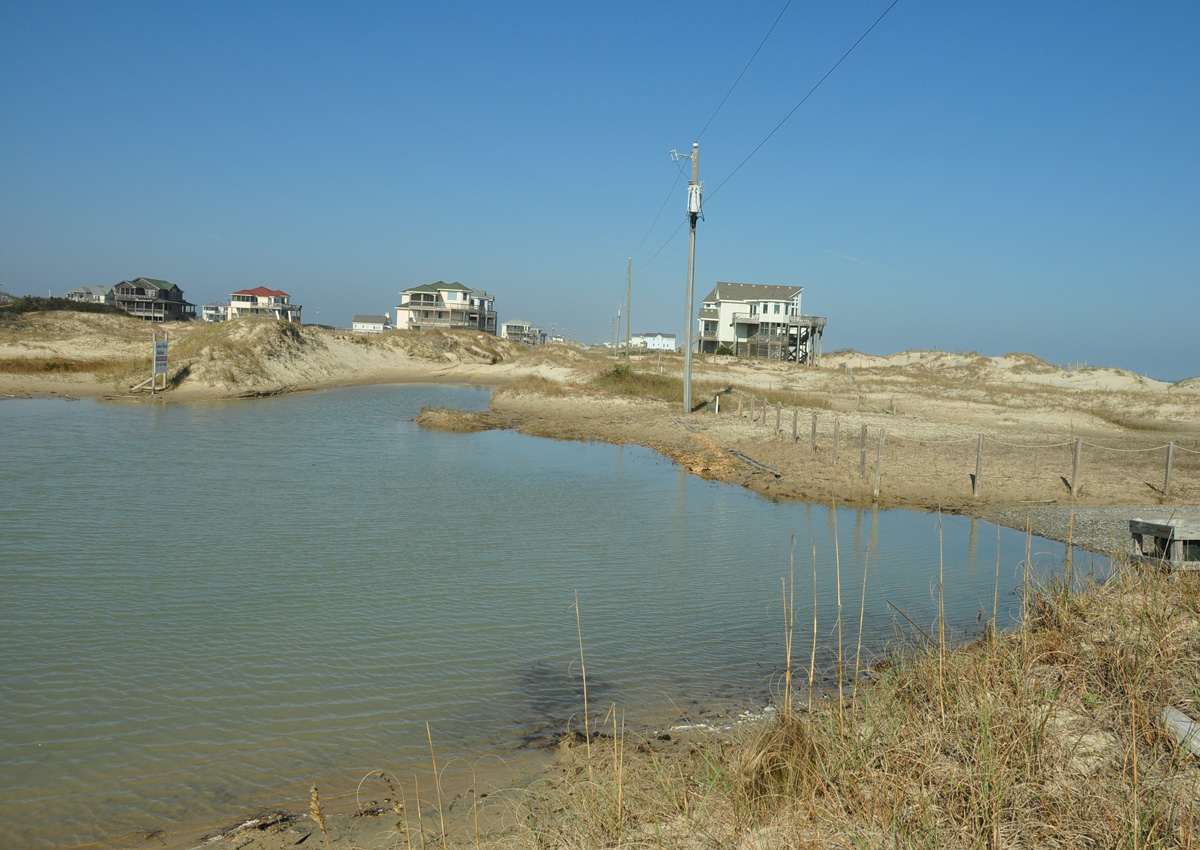 Hurricane Michael developed in the Caribbean Sea in 2018 and quickly became a very powerful storm, making landfall as a Category 5 on the Florida Panhandle. The storm weakened to a tropical storm as it traveled inland. It moved across the sound from the west, surprising the sound side of the OBX with its storm surge and middle-of-the-night flash flooding that damaged many homes.

What should I do if a hurricane impacts my Outer Banks vacation?

During hurricane season, there’s always the possibility of a storm affecting your Outer Banks vacation. Visit our weather page for current information about the weather on the OBX. The page includes links to major weather websites, local websites, Travel Insurance information, and hurricane FAQs. If a storm is imminent, weather bulletins and video updates will be posted. The same information will be posted to Twiddy’s social media channels, and guests will be contacted with relevant information via phone, text, and email.

"OBX Hurricanes" with your friends and family: