Looking Back at 40 Years of Twiddy

Twiddy & Company has been here as a family business all these years because we love helping other families create memories here on the Outer Banks.

Forty years teaches us that it’s not about us; Twiddy & Company has been here as a family business all these years because we love helping other families create memories here on the Outer Banks. For years, we’ve observed the joy that comes with simply asking for keys and a map at check-in. From our humble beginning in 1978, we’ve always strived to not just get something done, but to get it done right.

Doug and Sharon Twiddy opened the first Twiddy & Company office in Duck just as the sleepy little fishing village was beginning to transition into a vacation destination. The modest office had just one phone line. Vacationers that took a chance doing business with Twiddy & Company were treated to true Southern hospitality.

In the 1980’s, Outer Banks beach vacation planning included conversations about the small villages of Duck, Corolla, Swan Beach, and Carova Beach. Twiddy & Company’s growth can be attributed to good business practices and the willingness to be creative. Reinvestment in the company and its culture during these years also contributed to its success.

Our rental brochure, printed once per year, showed our home inventory, with rates, amenities, and hand-drawn renderings of each home. Popular amenities at the time were ceiling fans and fish cleaning tables. Central air conditioning and heat was considered a “modern” amenity. 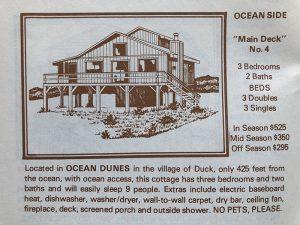 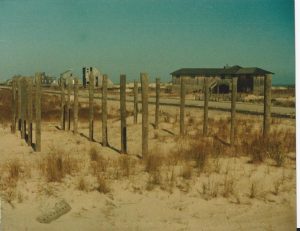 The Outer Banks vacation rental market was very competitive in the 1990’s. The word was out on the value of an Outer Banks family vacation. The rental brochure was printed in a full-color magazine format, and aerial maps were included to show home locations. Twiddy & Company worked diligently to find ways to stand apart from the competition. As always, time and money were invested in hospitality training for staff. Nurturing the concept of respect within our team was a priority. 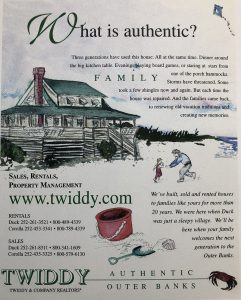 In the early 2000’s, the second generation eagerly navigated the company into the digital age. They worked to honor the values of the family business that had earned a reputation for excellence, while also developing relationships with partners to create and innovate. Staff development and recruitment continued to be a priority, with emphasis on treating each other with respect, cooperating, working as a team, and providing excellent Southern hospitality. Throughout the Outer Banks, Twiddy & Company became known as a great place to work. 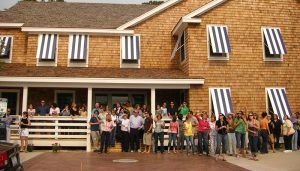 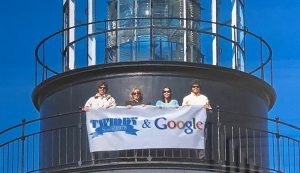 Twiddy & Company continues to find the most innovative methods of making their homes competitive and keeping homeowners informed. Southern hospitality is consistently delivered by staff to guests, owners, and each other as they strive for a propitious niche. Twiddy & Company’s number one priority is still to honor the worth of a vacation.

At 40 years, we are most proud of the culture, the people, and the reputation of hospitality. 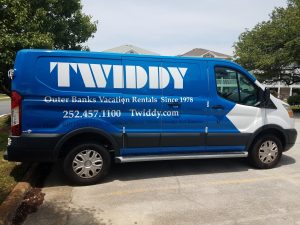 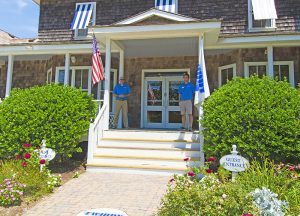 "Looking Back at 40 Years of Twiddy" with your friends and family: